What does it mean to co-produce research? The term is used so extensively and diversely that it might be considered merely a convenient buzzword used at the intersection of academics, funders, and communities. There is an extensive series of justifications for co-producing research with communities. Co-producing research, for example, empowers, emancipates, enacts equal and democratic relationships, and aligns with rights-based discourses. Despite these noble aspirations there is a long-standing critique that co-production reproduces the academic or elite power relations it claims to unsettle, whether as tyranny, governmentality strategy, or regulation. A consensus position is that co-production is the space, discourse, and practices that allow us to unlearn and re-imagine research beyond the inheritances of academia as a society of letters. What grounds and commitments might help us navigate the critique and work towards worthwhile aims in collaboratively researching across and beyond the boundaries of the campus?

The co-productive imagination is inspired by speculative and process approaches to explore ways of theorising and practising collaborative research that are adequate to understanding the complexity of the world. Following A.N. Whitehead, this approach seeks to continually question academic abstractions that may result in our minds and inquiries following familiar grooves. Instead, co-production becomes an imaginative act where we iteratively develop propositions – encounters with new ways of feeling and thinking – and then we cultivate our imaginative capacities to understand what potentials are made possible in this situation. Although including concerns of empowerment and equality the focus becomes the creative realisation of events, which are understood as new ways of thinking and feeling that changes our orientations to the world.

The focus of the article emerges from the Loneliness Connects Us youth co-research project which explored loneliness with young people through arts-based and creative methods. I describe my slow and eventful realisation that one of the youth co-researchers was playing a crucial role in co-producing the project aim of creating a space in which we could explore loneliness ethically, productively, and with care for one another across difference. The way this finding came about questioned any claims I might make for co-production as equality, empowerment, or democracy. Instead, it justified thinking about the imaginative processes and practices of doing the research and realising that something matters! Drawing on speculative and process approaches, the article identifies a series of practices and commitments – appetition, techniques of relation, patterned contrasts – that work towards eventful realisations. It is, of course, important that in the shift from co-production as equality to co-production as eventful realisation that young people are not marginalised in research in pursuit of what thoughts and feelings are interesting. Yet, it is equally important to not let abstractions of co-production fix the ways in which we develop research. The aim therefore is not to lose young people but rather to fold commitments for young people with an ethics of the event, finding and tracing multiple and eventful contributions, collaboratively creating new propositions and possibilities to re-imagine a world in process.

View all posts by socmediaeditor 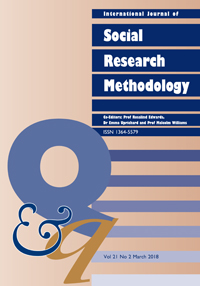 Our current issue
Our archive